Hooray For The Hosta

So many hosta plants and I know the name of not one of them. Why didn't someone tell me that those plants tags might come in handy some day? I'd like to be part of the hosta cult, but don't think I qualify now. These photos are all in the front yard. There are many more of them in the backyard where they get a lot of sun. They don't seem to mind the sun and actually get bigger than the ones in the front.
I enjoy the wider shot photos in other blogs, so I'm going to start including some of those. This was taken from the front porch. The orange Oriole feeder has been replaced with this hummingbird feeder and the Orioles still come to it along with the hummingbirds, although not at the same time. Nice shot of the neighbor's house. I wouldn't mind having their front porch. 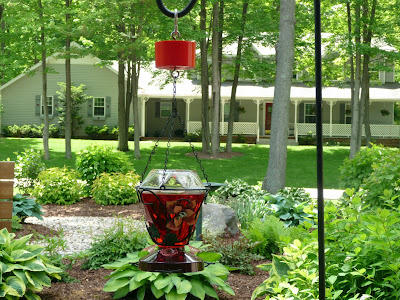 This was originally the NFL garden and not my idea. It had to do with the colors in the NFC Central but has evolved out of that and I'm not sad about it. The small plants coming up around the tree are the black-eyed susan or as some of you may prefer, Rudbeckia fulgida 'Goldstrum', and I probably didn't get that right (but I keep trying). They are the love of my garden life and if I could only have one perennial, this would be it. 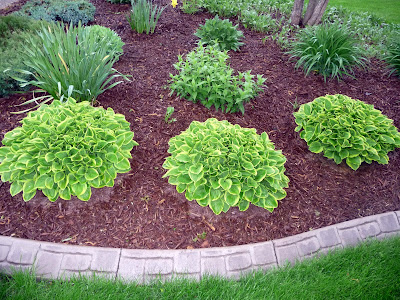 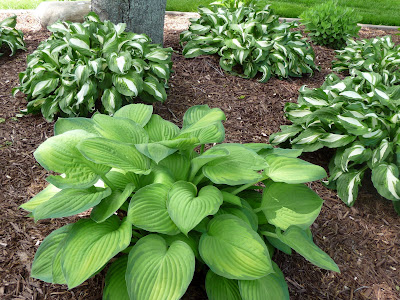 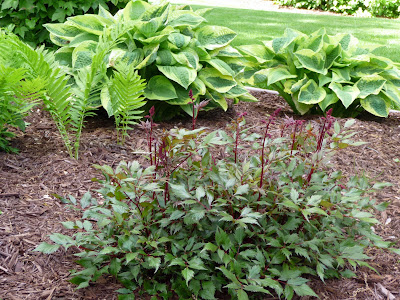 Even more hostas with a small pot of Fushia tucked in for color. Daylilies in the background. 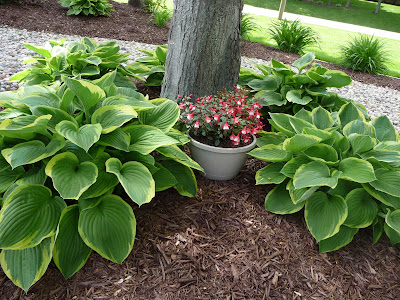 I'm posting this in a hurry and hoping it makes sense. You're probably thinking that it doesn't seem any less thrown together than all my other posts and you'd be right.

Picking Phillip up at his summer school Spanish class at 9:45 (45 minutes away), bringing him back here for the day until it's time to drive him back for soccer practice. I'll watch practice and then bring him back here again where he'll spend the night and then I'll drive him to Spanish class in the morning. Doing a favor for his parents and the reason I'm in a hurry this morning.