Oh, Mandy, you came and
You gave without taking
But I sent you away
To live in the bathroom that
Has gosh awful 1980s pink wallpaper.
A silly play on Barry Manilow's lyrics.
‘Alice Du Pont’ made her way home with me from the green house in late June. It was my first time to have a Mandevilla. The plant was small. There were a handful of leaves and a couple of buds, but no blooms. In a matter of days, there were several showy flowers. 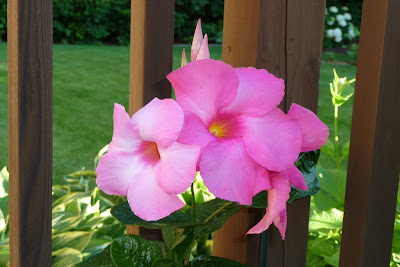 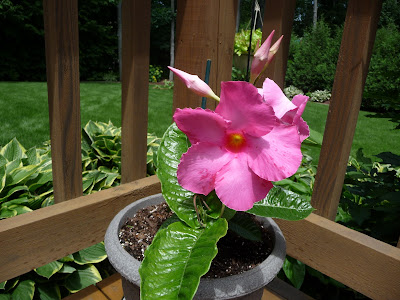 I moved the pot off the deck onto the ground and the vine made its way around the railing. This tropical plant looked pretty first thing in the morning and equally as beautiful in the early evening after a light rain. 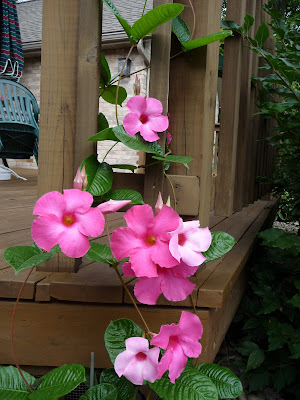 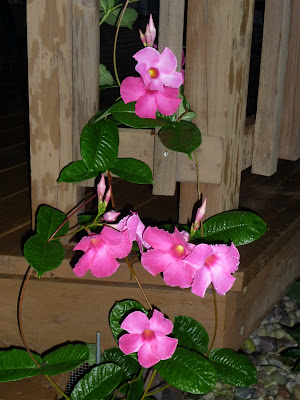 I don’t normally overwinter plants, but in late September an exception was made and I moved the plant into a sunny bathroom. Butterscotch immediately thought that ‘Alice Du Pont’ was placed there purely for his entertainment. 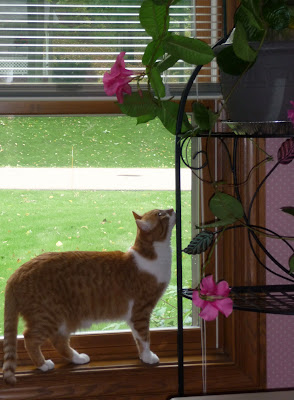 This last photo was taken in late December. I’ve kept the plant on the dry side and it’s only lost a few leaves. There’s a small newspaper article taped to the plant stand that says if you’re going to overwinter a Mandevilla and don’t want to wait until the following August for it to bloom again, do NOT prune it any later than February. I’m interested to know what you might have to say about caring for a Mandevilla that’s been brought inside for the winter. 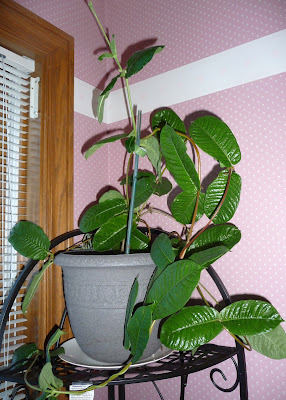 I’m sure many of you have grown Mandevillas that make mine look puny, but I thoroughly enjoyed this plant and will most likely make sure that there’s always one in my summer garden. How do you like the pink wallpaper? It's old, but not as old as Barry Manilow's song.
Posted by donna 31 comments: