When Susie from Poppy and Sage read that I was going to be visiting San Diego, she recommended I visit Cedros Gardens in Solana Beach which is 15 miles north of downtown. I never made it there, but did manage to take a few pictures of the flowers I saw on Coronado Island and at Seaport Village. Flowers blooming outside in December. Imagine that!
My rickety old computer doesn't let me leave comments on Susie's blog, so I read and enjoy and then feel frustrated that I can't blabber on and on with my comments. Leaving comments only seems to work for me if the blogger is using the pop-up window for comments, as opposed to embedded below post. Hint. Hint.
On Coronado Island, I saw all these poinsettias planted around all the big evergreens growing in the median on Orange Avenue. We were told that in the early years of the Island orange trees were used for landscaping along the avenue, but jackrabbits eventually ate the tree roots and the orange trees were not replaced. Trees less tasty to jackrabbits were planted, but the name Orange Avenue remained.
Something I learned about poinsettias while in San Diego is that the Paul Ecke Ranch in Encinitas, CA provides 80% of all poinsettias worldwide. I find that almost impossible to believe, but if they say it's true, that's good enough for me. 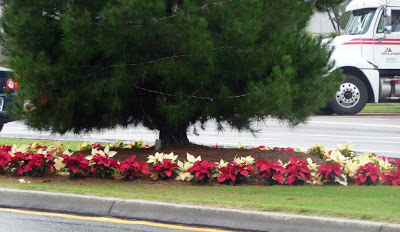 Birds of Paradise were blooming everywhere we went. Orange is not my favorite color for flowers, but I fell in love with these beautiful flowers and how they resemble a bird in flight. The glossy green foliage is also very attractive. They are native to South Africa and are sometimes referred to as Crane flowers. It's my understanding that they bloom September through May, so that explains why we saw so many of them. 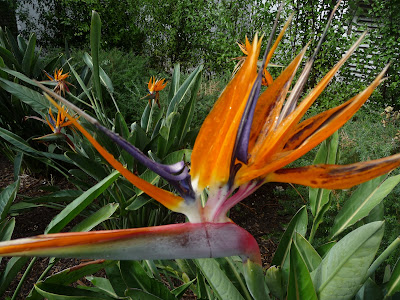 At Seaport Village, there were many beds of white alyssum and red & white cyclamen growing outside the shops and restaurants. Beautiful, natural Christmas decorations. I only think of cyclamen as a house plant but it can be grown outside provided the temperature doesn't fall below 50 degrees. I've always liked how the stems hold the flowers up over the silvery marbled leaves. 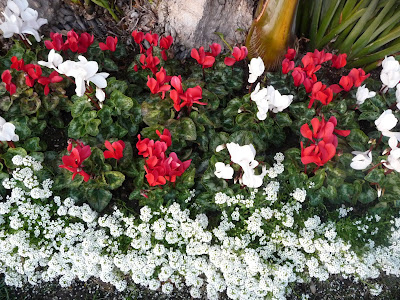 There were also a lot of these bushes with blue berries that caught my eye. I don't know the name of it. Susie is a professional landscape designer, so maybe she can help me out. 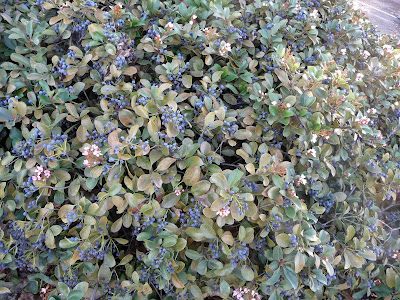 These plants with the purple flowers were growing in containers. Although it looks familiar to me, I can't think of the name. Susie? Anyone else? 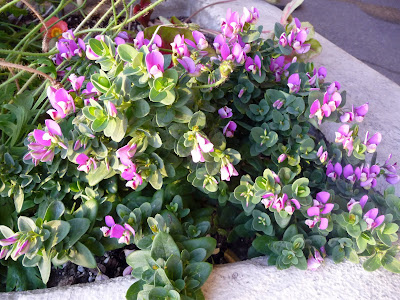 I also saw many trees that were very unusual and entirely new to me. I'll save those for another post.
In less than 48 hours, it will be January and my thoughts will start turning to spring. That's not necessarily a good thing because spring is still a long way off for all of us in zone 4, but that won't stop me from dreaming.
Happy New Year!